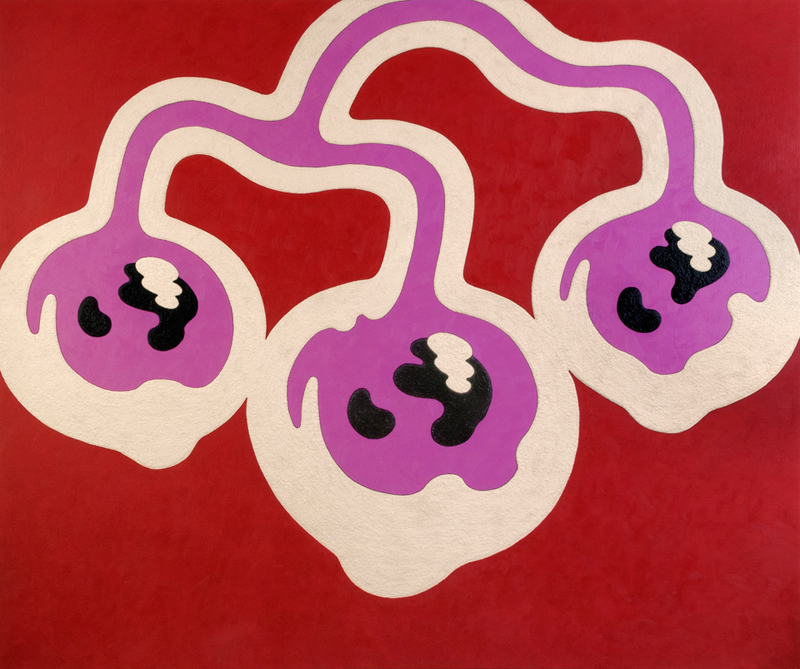 My new solo exhibition opens at GALLERY wks. in Osaka. It will be my first exhibition after a long break. The title of this exhibition is “KyoKyoJitsuJitsu Game – playing between the virtual and the real”.

I really went back to basics to produce the works for this exhibition. Please come and see my paintings!

“Art resides in the Himaku (membrane) between fiction and fact. Fiction without being fictional, fact without being factual: there exists a rich playground between these two extremes.”
“The theory of Kyojitsu-Himaku” (the theory of the Himaku between fiction and fact) by Monzaemon Chikamatsu, a playwright from Edo period.
Source: “Naniwa Miyage” (Souvenirs of Naniwa), Ikan Hozumi

The question of how artists should understand the fictional world before building their own ones and how they should meet the challenge of developing their own original ideas in that world gives artists a unique view point on art itself, I believe. Indeed, anyone whose profession concerns creativity, including painters, novelists and musicians, takes this view point when looking at the fictional world. I have always been concerned that I am not just simply painting but that I should also express my opinion about the fictional world through creating art works. I would also like to give feedback and pose questions to the art world. It is not at all easy to weave reality into the fictional world of the painting. It is a kind of fight in the space between my own ideas and those found in the contexts of contemporary art, in which I try to use various strategies. In other words, it is a game of KyoKyoJitsuJitsu.

When I was an art student, I used to paint landscapes deliberately trying to remove any abstract elements from them. I was quite conscious about the picture frame and my compositions were made with vertical and horizontal lines. One day I wanted to be liberated from the constraints of this fixed idea about the picture frame in modernist paintings. Then I removed all the straight lines and started to paint organic lines to make my paintings flow. In that sense, I think that “Mickey, Germ” in 1991 was different from the previous paintings I had made. However, I then lost my way when it came to deciding how to handle the weight of these organic forms. I wanted to paint organic forms but at the same time I wanted to erase them. My mind was filled with these two opposite desires. 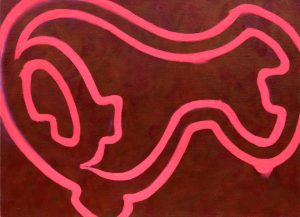 I wanted to paint forms but at the same time I didn’t want to be constrained by the heaviness of a solid area. How about painting just a contour of the form? I started to reconsider this after a long break of not creating and presenting works publicly. At first I made an outline of the form and then made another outline of the first one. The result was that the double lines looked like mountain ridges resembling the ones on the surface of the Jupiter’s moon Europa: so I called this work “Double Ridge”. The organic forms became free from weight because of this double ridge and the real form became blurred. Looking at it strange emotions were aroused within me. “Analogy of Shells and Ears by Double Ridge” was the first work made using this technique. 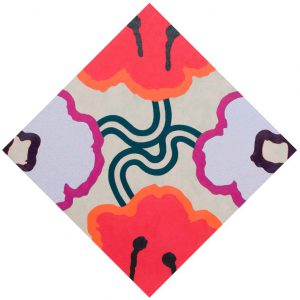 The main motif is normally painted at the center of a picture. What happens if I divide the motif and place the parts on either side of the frame? This work is based on the idea of division and inversion. (Incidentally I had previously made some works in which the picture frames were tilted 45 degrees when I was a student.)

I combined cherries and musical notes. I mixed paint and powdered stone to paint the contours, so that it looks like there is more weight in the contours than in the form itself. I deliberately tried for an effect as if the main motifs and the sub-motifs were inverted.

I treated the outlines as if they are the main forms or I inverted the main motif and the sub-motif. These ideas came from my subconscious desire to reverse the negative and the positive and go freely between the virtual and the real. As I also wrote at the beginning, that is the reason why I chose the title “KyoKyoJitsuJitsu Game” for the exhibition which will be my new start as an artist.